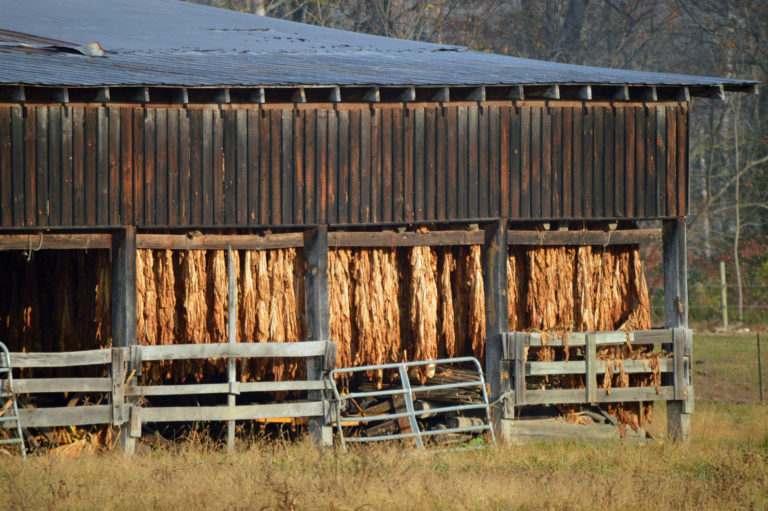 To be a tobacco grower you have to be an inveterate gambler. I'm talking about tobacco grown in the valley lands of the Housatonic river and in particular, the town of Kent. Grown in the open and not the dilettante operation practiced in the Connecticut Valley. The bottom lands are fertile to begin with, due to the periodic flooding of the Housatonic but they are augmented all winter and spring by most of the fertilizer from the farm to the detriment of the rest of the farm land. This crop of tobacco is to be the big cash crop for the farmer. He puts his farm assets, from the before mentioned fertilizer, man power, and time into this venture together with the biggest item, hope.

Toward the middle of March the farmer goes to his orchard to take soil from the crotch of an old apple tree. No peat moss to fall back on in those days. He comes back with a pail of the apple tree dirt and takes out the tobacco seed he has had stored in a dry spot, usually on a beam in the attic. He mixes the seed with the soil and puts the mixture in fruit cans and places it in back of the kitchen stove. In later years on top of the furnace. The time spent waiting for the seed to sprout is spent by the farmer's wife in sewing together, on the old pedal operated sewing machine, five hundred yards of cheesecloth, and the farmer is preparing his hot beds by turning in about a foot of fertilizer, then smoothing the soil.

About the 10th of April the sprouted seed is sown in the beds, raked in, tamped down and watered. Then the cheesecloth is stretched over the raised dividing wire running through the middle, the length of the beds, and tacked down on the sides. It's a waiting game now for if there's anything slower to grow than a tobacco plant, it's unknown. The beds have to be dampened just so and in time, with luck, you've got a million, more or less, of the smallest plants you ever saw.

You're off to a good start providing you don't get a late frost or freeze, in which case you get yourself out early to those beds and you stand with a hose and wet down the beds until after sunup. Then you've the backbreaking job of weeding the beds. No job for amateurs. The weed from Spain, galansoga, and a young tobacco plant look alike.

By the 25th of May, the plants are large enough to be lifted into flats. At the same time you've gotten your setting machine in order. The big barrel up front is filled with water, the team is put to and two men are ready to sit on the two low slung seats in back with the flats of plants between them and the planting begins.

Next you have to walk your planting to observe that none were skipped or died, and you reset by hand. Then you hoe and hoe and hoe some more.

When the plants are about waist-high you top the plant. All but the ones you have marked to save for seed. Then you have to remove the laterals or suckers. All this to make a broad-leafed plant.

In the time I am writing of, the plants were dewormed by hand. Young boys in those days did this work for a penny a tobacco worm. Today the tobacco is sprayed which is no good for the smoker of the weed. All through June, July and until cutting time in August you watch every electrical storm and pray that it brings no hail with it. Five minutes can transform those lovely fields of tobacco into a shambles and there goes all the labor and hopes for that sizable check.

If all goes well about the 25th of August, you start cutting the plants. Now you need extra help. Unlike the present time it always seemed available. If not in the full amount needed, neighbor helped neighbor. The cut plants wilt in the sun so they are not brittle to handle. They are then strung on laths that are fitted with a very sharp steel point called a needle and are loaded onto a low slung framed wagon that just takes the laths crosswise and are taken to a pole barn to be handed up to a man standing on the poles in the peak of the barn. He works down the poles being careful to place the laths so air will circulate around the plants.

You see barns in the middle of a large field. Today, those that are still standing are filled with bales of hay. Not in the days I'm writing about. These are the pole barns where the tobacco was hung to cure. These barns were so constructed that the sides opened up for added circulation of air. They were opened on a clear day and closed on damp rainy days until the tobacco was dry or cured down.

Before it was entirely dried the buyer came. Generally from New Milford, Mr. Sherman Green or Mr. William Richmond, but Mr. Reynolds of the Reynolds Tobacco Company has been in Kent, several times, to buy directly from the farmer. The buyers look over the quality of leaf and search for the pole burns or holes in the leaves from hail. The price varied according to the merits of the crop and was governed by something that is never mentioned these days; supply and demand. The price has been as low as five cents a pound and as high as forty cents a pound.

Now you wait for November or December to get a break in the weather to get a warm rain with accompanying fog. Then you work like crazy to take down the laths of tobacco, take the plants off the laths and pile them on the ground of the pole barn and cover them over with corn stalks and sacking to retain the moisture. Then the word goes out that you're ready to strip the tobacco and break out the cider and your neighbors come and you strip the leaves from the stalk.
You strip all day and by lantern light at nigh while the leaves are damp. The leaves are packed in a wooden frame that is lined with very heavy paper made especially for this work. It is tied and when taken out of the frame it is a bale and all are uniform in size - 40 pounds in weight.

Next the tobacco goes to the sorting shop. Kent at one time had two shops. The white barn that stands in the farmyard of what was the Templeton farm used to stand at the curve of Rt. 341 at the end of Maple Street. It had one more story than it has now, made of brick. It has an elevator in it to lift the bales to the sorting room above and then to the top floor for storage. The other shop was across the tracks in the red building now owned by the Caseys.

The white shop was run by Luther Eaton and the red shop by Green and Soule of New Milford. The sorting shop is kept at high humidity and the leaves are now graded into wrappers, binders and fillers and bound into a bunch called a hand and each is then packed according to identity into bales such as were used in the stripping process. Then it is taken to the tobacco companies. The sorting shops provided winter work for a good many people in the town.

Tobacco was grown in the town of Kent and now I'm talking about Kent Hollow, Macedonia, Skiff Mountain, Segar Mountain, Geer Mountain and Fuller Mountain from the end of the Civil War until 1934. The crop survived World War I but by 1925 labor had shifted to the cities and without seasonal help, a tobacco crop is doomed. Tobacco is still grown in the Connecticut River Valley with migrant labor from Mexico, Puerto Rico and the southern states but no such system was ever contemplated for Kent.

by Caroline Templeton Manley for the Kent Historical Society, April 1970