The Flanders Historic District lies about two miles north of the center of Kent on Rte 7. Seven Hearths is the large gray house on the eastern side of Rte 7 at the base of Studio Hill. Owned by the Kent Historical Society, and open to the public as a house museum, it is on the National Register of Historic Houses.

The Seven Hearths is the prized possession of the Kent Historical Society, an imposing pre-Revolutionary house located in the heart of the Flanders Historic District in Kent.
Discovered by hundreds of new visitors who came to Kent in 2005 for the Smithsonian's Barn Again!© exhibit, Seven Hearths is now undergoing significant restoration.

What began as the repair of the crumbling north chimney has now expanded to an exciting re-creation of a more accurate 18th-century version of the house. Built by John Beebe, Jr., in 1751, this colonial house stands in contrast to the earlier houses of the Flanders District because of its large scale. Constructed as one unit measuring 32 feet by 52 feet, with rooms and a cellar that is nine feet high, its architectural features are of interest to restoration buffs.

"We had a small bulldozer, air compressor and dump trucks," said Bigelow, 92 who now lives in Enfield. "I helped load the trucks with rocks we gathered in the woods. To this day I still have back problems that I attribute to that hard work.

"On the job, we had to use a lot of dynamite. One guy, Joe Gories from New Britain, was in charge. He got paid a little extra for his work. Just before they lit the charge I had to go to a safe area. Then they'd yell "fire in the hole."

The house's furnishings and other interior accessories reflect phases of Kent history that were
part of the occupants' lives. Seven Hearths was willed to the Society by famed artist George Laurence Nelson, who bought the dilapidated structure in 1919, restored it and lived in it until his death in 1978. Mr. Nelson wrote an enchanting account of his love affair with Seven Hearths, entitled New Life for Old Timber, which is available from the Historical Society Bookstore.

Exhibitions at Seven Hearths are changed each year. The 2017 Exhibit is "Founders of Kent - Starting From Scratch on the Colonial Frontier." These include exhibitions from the Society's own collection, collections on loan, community exhibits, as well as presentations of the work of Mr. Nelson and his parents, who were also artists.

Seven Hearths is closed during the winter but can be visited at any time by appointment. We enjoy giving private tours! If you are unable to visit us in person, we invite you to take a virtual tour of the house with us. 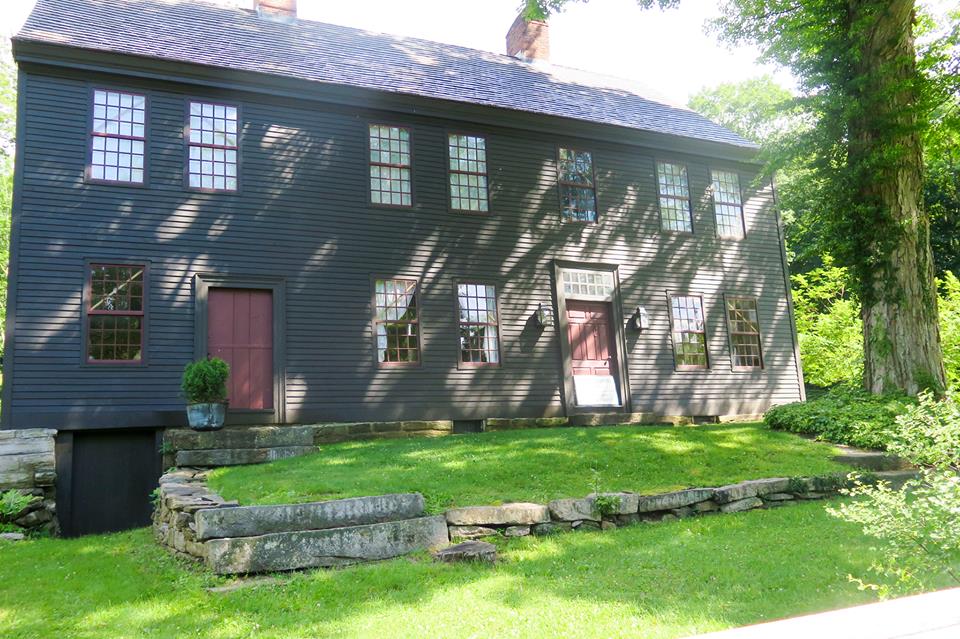